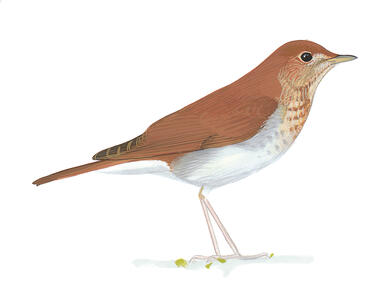 Each summer, around 25 lucky Connecticut high school students are hired to help Audubon Connecticut protect birds and the places we all need. On the shoreline, the WildLife Guards teach beachgoers the importance of respecting nesting shorebirds while collecting data on the shorebirds themselves; in the woods, Junior Forest Technicians (JFTs) manage and monitor local woodlands to make them into better habitat for birds.

This summer, the JFTs and the WildLife Guards’ West Haven Crew got a taste of each other’s roles and responsibilities when they had two “swap days."

The WildLife Guards got the chance first, traveling up to the Bent of the River Audubon Center to spend a day with the JFTs. The morning got off to an exciting start with a bird banding demonstration with the JFTs during which a hatch-year Veery was banded—a sure sign that Veeries are nesting in the area. For the JFTs and their program manager, Glen Somogie, this was a sign of the impact of their work.

“Veeries require specific habitat for nesting including a damp, dense, deciduous forest in swampy areas,” he said, “They prefer disturbed forests and dense understories for foraging which connects with the Bent’s habitat management plan of conserving early successional habitat.”

Next, the JFTs led the WildLife Guards to a forested plot where they are collecting data and learning forestry skills, from taking different measurements of trees to monitoring native and invasive species, all contributing to their understanding of the forest’s health.

“These WildLife Guard students do not normally get the opportunity to explore and learn about our woods, so it was nice to see them experiencing this habitat type,” said Corrie Folsom-O’Keefe, Director of Bird Conservation for Audubon Connecticut. “And it was great to see the JFTs stepping up and teaching the WildLife Guards about what they do.”

After such a fantastic day at the Bent, it was time for the forestry crew to make their way down to the shore. Traveling to Sandy Point Beach and Bird Sanctuary, one of the sites monitored by the West Haven WildLife Guards Crew, the JFTs first learned how to share the shore with beach-nesting birds, even signing the Be a Good Pledge to commit to keeping nesting shorebirds safe. They then got a chance to see what a day in the field was like out on the beaches, going out with field guides and binoculars to learn to identify and record data on adult birds and their nests.

Collecting this data allows these students to contribute to over a decade of research on populations of threatened and endangered birds, like the Piping Plover and American Oystercatcher. For Audubon and many other conservation organizations, this data helps us understand if conservation strategies we are implementing are successful.

The two swap days not only connected the students to new skills, experiences, and habitats, but also to each other. “Overall, I think it was great for students who all have the same passion, to protect these native species, to work together and learn from one another,” said Emily.