November 16, 2017—In an announcement made by top federal and state environmental officials, Audubon Connecticut was honored as a  recipient of two grant awards from the Long Island Sound Futures Fund (LISFF). The funds will contribute to sustaining and growing Audubon Connecticut's successful  WildLife Guards and Schoolyard Habitat Programs in 2018.

With this year's grants, more than 870,000 residents will be reached through environmental and conservation education programs. Water quality improvement projects will treat 439,000 gallons of water runoff, reducing more than 15,600 pounds of nitrogen, and collecting 2,800 pounds of floating trash. The grants will be matched by $1.1 million from the grantees, resulting in $2.45 million in funding for on-the-ground conservation in Connecticut and New England.

The generous matching grant of $27,181 going towards the WildLife Guards Program will allow Audubon Connecticut to continue to train and employ students in coastal stewardship. The students not only gain a strong foundation of skills and knowledge in the field of conservation, they also serve as a valuable resource educating the public about beach-nesting coastal waterbirds—which in turn allows residents to enjoy the beach and Piping Plovers and Least Terns to nest successfully.

“Audubon Connecticut is delighted to be the recipient of two Long Island Sound Futures Fund awards!” says Corrie Folsom-O’Keefe, Audubon’s Bird Conservation Programs Manager. “With this support, we will be able to double the size of the WildLife Guards program in West Haven. The program makes a real difference for coastal stewardship and habitat restoration and provides amazing career opportunities for the current students and alumni of the program.”

Additionally, the $44,999 LISFF matching grant awarded to Audubon’s Schoolyard Habitat Program will further deepen student connections between the schoolyard and Long Island Sound. “We are excited to launch a variety of digital tools and a social marketing campaign to engage school communities in everyday actions they can take right in their own schoolyards to benefit birds, people, and the health of the Sound,” says Bird-friendly Communities Manager Katie Blake.

Long Island Sound is an estuary that provides economic and recreational benefits to millions of people while also providing habitat for more than 1,200 invertebrates, 170 species of fish, and dozens of species of migratory birds. Each LISFF project contributes to a healthier Long Island Sound for everyone, from nearby area residents to those at the furthest reaches of the Sound. All nine million people who live, work, and play in the Sound’s watershed can benefit from and help build on the progress that has already been made.

If you would also like to help support Audubon Connecticut's conservation work, please select here.

The Long Island Sound Futures Fund grant program combines funds from the U.S. Environmental Protection Agency (U.S. EPA), and the National Fish and Wildlife Foundation (NFWF) to support local government and community group projects that aim to protect and restore the Long Island Sound. The Long Island Sound Study initiated the LISFF in 2005 through the U.S. EPA’s Long Island Sound Office and NFWF. To date, the Futures Fund has invested $17 million in 380 projects. With grantee match of $33 million, the program generated $50 million for locally based conservation. The projects have opened up 157 river miles for fish passage; restored 1,090 acres of critical fish and wildlife habitat and open space; treated 202 million gallons of pollution; and educated and engaged 3 million people from communities surrounding the Sound.

To learn more about the 2017 LISFF grant awards, select here. 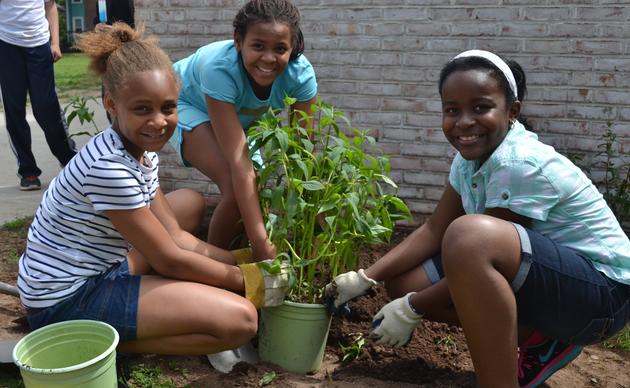 Schoolyard Habitats are designed to connect students with the outdoors, create wildlife habitat that benefits both wildlife and people, and to inspire the next generation of environmental leaders.

Learn How to Get Started