Learn more about this incredible migratory bird species, which resides in Connecticut during the spring and summer months

Conservation Status and History of Osprey in Connecticut

In the 1940s, Ospreys were fairly common in Connecticut, with hundreds of active nests. By the late 1960s, coastal development and the impact of DDT causing thin eggshells, reduced the Osprey population dramatically—there were fewer than 150 active nests by 1969, and the number dropped to fewer than 10 active nests in the state by 1974.

The good news is that DDT was banned in the 1970s, as a result of Rachel Carson’s landmark book Silent Spring and the concerted efforts of Audubon and other conservation organizations. Since then, there has been a steady increase in the Osprey population in Connecticut and other states where the species breeds during the summer. Another major help in this recovery has been the building of nesting platforms by Audubon chapters and many other conservation groups. There are more than 400 active nests in Connecticut today, and the number is growing.

Today the limiting factors and threats for osprey populations are:

Ways You Can Help

For additional information about Ospreys in Connecticut, visit the Connecticut Department of Energy & Environmental Protection website.

Check out our Osprey Cam located in Greenwich, Conn. Get a close-up view of daily life on the nest through amazing live, streaming video. Stay tuned to see what happens next! 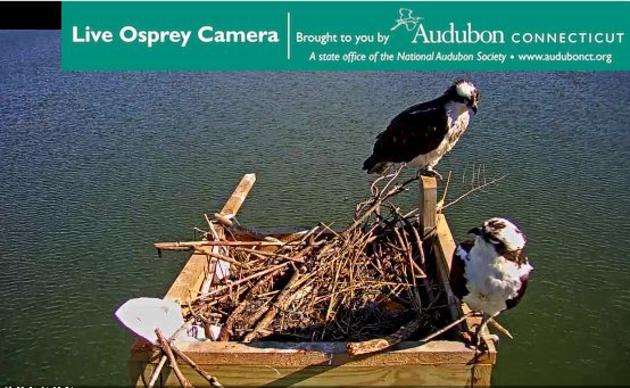